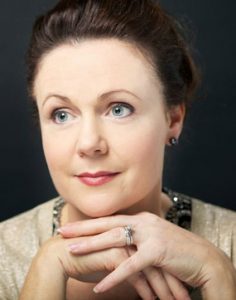 She won numerous senior competitions including The Margaret Burke-Sheridan Cup, Calthorpe Cup, Tattan Cup, Stanford Cup, culminating in the Gervase Elwes overall vocal prize in Feis Ceoil. She graduated with distinction and went on to win a scholarship to study at Trinity College London, under the tutorship of Valerie Masterson OBE. In London Colette won a number of prestigious awards including the BBC Young Artists Forum Award and The Royal Overseas League Prize.

Colette was offered her first solo role in Alban Berg’s Lulu at Glyndebourne Festival Opera, that same year she was awarded the Erich Vietheer prize for most promising young Glyndebourne artist.

As well as Susanna in Le Nozze di Figaro, Colette has sung many roles for Glyndebourne Opera including a performance of Berg’s Lulu at the BBC Proms. Colette sang many roles also with Opera North, Aix-en-Provence, France and made her debut in The Bartered Bride with Bernard Haitink at The Royal Opera House, Covent Garden. More recently Colette has performed principal roles in The Marriage of Figaro and Cosi Fan Tutte with Opera Theatre Company, roles with Lyric Opera including Marriage of Figaro and ‘Stella’ in the Irish premier A Streetcar Named Desire by André Previn.

Colette has performed extensively in concert and oratorio throughout Ireland and Britain working most notably with The BBC Philharmonic, The London Sinfonia, The RTE National Symphony Orchestra and The RTE Concert Orchestra. Recent performances have included Mozart’s Requiem, Mozart’s Mass in C , Beethoven’s Choral Symphony, Faure’s Requiem and Brahms ‘s Requiem at London venues and a premiere performance of Handel’s Messiah in Doha, Qatar. Colette has had the huge honour of being the soloist at The National Day of Commemoration 2014 and ‘16 with both the President and Taoiseach in attendance, which was broadcast live on RTE. Highlights of last year included the premiere performance with the RTE Contempo Quartet and composer Anne-Marie O Farrell, a recital for RTE Lyric FM, a performance at Aras an Uachtarain, a lieder recital in NCH John Field Room and St Ann’s Dawson Street.

Colette had the great honour of performing at the Military Headquarters Genoa Italy last year and participated in a production of Gianni Schicchi with Opera in the Open. Colette really enjoys teaching, adjudicating and helping young performers and music students to develop their talents.